What the Orlando Killer Was Thinking

Among the healthiest things you learn as a journalist is that the world is a hazy, cloudy place, rarely clear, not often black and white, where two opposites may be true at the same time, and that as things change all the time you need to move with them as they roil.

In my experience, these mass shootings teach us this over and over.

The latest wrinkle in the nauseating Orlando massacre, reported in the LA Times, is that the killer spent the previous year drinking at the gay bar he shot up, so much so that he was recognized by people he was shooting at that night. He also spent time on a gay chat app.

All this adds more nuance – predictable in all these cases as they unfold and more is known.

After all, what truly straight man goes regularly to drink alone at a gay bar? He’d been doing it for more than a year. What straight man also spends time on a gay chat app?

In that light, this Islamic thing may be as much of a cloak as anything else, a way of finding some kind of larger romantic rationale for what he was in the process of doing.

Unclear to me that he was much of a clear thinker, but that’s self-evident.

(Note: Several days after I posted this, information surfaced that Mateen may have had as many as two gay affairs and that one with a Puerto Rican man may have resulted in him being HIV+.)

I mention all this because it falls in line with other cases I’ve covered as a reporter.

I’m very happy to ascribe fanatical religious/political/terrorist motives. But as a reporter, I’ve also covered seven mass murders (Stockton, Tucson, Aurora and Newtown among them) and in each case I was one of the journalists assigned to find out as much as possible about the suspect.

In each case, I came to have a very nuanced, though at the same time quite cloudy, view of the way the person thought or appears to have thought before he died. Because in the end, that’s the truth of the matter. It lies usually quite a way from how things appeared on first blush.

In Stockton (1989, the first of these mass shootings), we thought the shooter must have harbored great hatred for Asians, as the elementary school he fired on was largely SE Asian. In time, I grew to believe that he may have had some cloudy hateful ideas about Asians, but that was the most you could probably say. In fact, he was probably incapable of holding a clear thought of any kind – this from all I learned about his life up to then, and then his motel room where he spent his last night (with little green plastic soldiers deployed all over the room and a shirt on which he had written, “Death to the Great Satin”

If anyone can tell me the clear thoughts that the shooters in Tucson, Aurora and Newtown had, I’d be very interested to hear. To me, they were all lost boys, murky in thinking, crazy, festering and unbalanced. Hence, finding a political meaning behind their actions was very difficult. We at first thought the Tucson shooter was a Tea Party member because he shot a Democratic congresswoman. Now, I can say with conviction that he was another boy out of his mind, lost, unfriended, scary to many, apolitical, and left by his parent to dangle on his own in the nether-reaches of virtual games.

This Orlando killer may have had some vague ideas of doing something for Allah and the Islamic state or (I now hear maybe) Hezbollah – I’m very willing to buy that. That’s who fanaticism wraps in its warm cloak – the lost, the embittered, the unbalanced. But the first information you get in these cases needs always to be balanced and blended with info, usually clearer, that comes later. So the stuff about his hanging out in Pulse for a year offers insight that we ought not ignore.

I can say that he does not seem like the Boston bombers, or the San Bernardino couple – all of whom were very focused, confirmed and dedicated Islamic terrorists, though perhaps technically solitary actors.

Those folks had a lot in common with Stavrogin, of Dostoevsky’s The Devils. Omar Mateen did not – at least that’s how it seems to me at this point.

Seems to me that his call to the cops about ISIS as he was shooting up the club was a way of very loudly saying, “…and just so’s you know, I’m NOT gay!”

What better way to say that than to invoke the world’s most notorious homophobes?

In my reporting career, I have covered seven American mass murders – one in 1989 in Stockton, and the rest in the last decade.

One was a guy parking his SUV in front of a commuter train (25 dead). The rest were committed with guns, usually by

deranged drifting people – all men, five of them white – who had remarkably easy access to high-powered guns.

I don’t know what more there is to say about these events. Seriously. They’re now so common that they have devolved into babble-fodder for our politico-cultural wars on the toxic battlefield of 24-hour cable news. Such a network, I suspect, could plan its profitability around the certainty of a boost in viewership from a couple of these events every year.

Somehow, despite all the talk, we never get around to doing anything about it.

We talked a lot but did nothing meaningful after Tucson and Aurora. Then 26 kids were shot to death at an elementary school and we did nothing. We did talk a lot, though.

People nowadays fall into rote after these events, saying profound things that have devolved into cliches from overuse.

“Our thoughts and prayers go out …” That’s a deep, poetic thing to say – that my thoughts and prayers I’m sending out in hopes they will soothe you and bind your wounds, that I am feeling for you and hope that in doing so it will lessen your pain. Yet it sounds trite any more.

I used to think that seven mass murders was a large number of mass murders to have covered in one’s reporting career.

Now another lost and drifting lunatic kills nine people in a church. A guy who by 21 is going nowhere, who apparently at one point had been abusing Suboxone (a heroin-addiction treatment). This time the guy has a racial animus.

Terrorist? I guess. Probably. Who knows?

“He looks bored,” one little girl I know said, upon seeing his mugshot. That’s sounds about right. His dad, bugging him to get a job, may have given him a gun for a 21st birthday present. Who does that? And why? To give him some direction in life? I don’t have the slightest idea why someone would do that.

(NOTE: It was later reported that Dylann Roof had, in fact, purchased the gun himself that he used in the church.)

I don’t know what to say any more about people who do these killings, or legislators who won’t do anything about these events, or 24-hour cable news babble, or dads who give their lost sons guns for presents, or a country that so easily moves on.

Todo Se Olvida – Everything Gets Forgotten

Out in Riverside the other day, I took a trip with police through Casa Blanca, just off the 91 Freeway.

Casa Blanca is one of the classic Mexican-American barrios of Southern California, named for a large white mansion on a hill a half-mile east of it and a brand of oranges. The area is still bordered by some orange groves.

It has fascinated me for many years, ever since the great Calvin Trillin wrote a masterful piece about it for the New Yorker, which he later included in his book, Killings. This is probably the best volume of crime reporting in American journalism. I’ve read Killings four times, I think.

Anyway, “Todo Se Paga” – Everything Gets Paid – told the story of the feud between the Ahumada and Lozano families in the insulated barrio that was itself like a small town, quite apart from the rest of Riverside. Police, in particular, were unwelcome. Only a few years ago, officers who went there still risked being hit with rocks, and neighbors would at times start bonfires in the middle of the streets.

Madison Street is the barrio’s dividing line – east of that was the Lozano family and west of that lived the Ahumadas.

Casa Blanca’s story was very un-Southern Californian – a rooted place, where houses were not only inherited but lived in by generations. Unlike most of the region, history mattered and people remembered and things lingered.

In 1992, after a police officer killed a notorious member of the Ahumadas – Georgie – the police chief of Riverside told the LA Times that the department had no vendetta against any of the families out in Casa Blanca.

“We’re not killing them–they’re killing each other,” he said. “If we really (sought) revenge, and wanted to carry it to its extreme, the best thing we could do is sit back and do nothing because they’ll eventually kill each other.”

Over the years, it all got very complicated, with people intermarrying but at the same time feuding, and having to choose sides. Eventually it devolved into two gangs – Fern Street (Ahumada) and Evans Street (Lozano) gangs. For years the gangs that grew from this feud were known for their violence.

Then about three years ago, it all stopped. Graffiti, feuding just ended. There hasn’t been a major crime incident in Casa Blanca for a while now, I’m told.

One cop I toured with said he thought it had to do with an order from drug-trafficking groups that the violence was attracting police attention and getting in the way of business.

That seems a likely possibility, something that’s happened elsewhere in Southern California as well.

But it also seems to me that the world finally came to Casa Blanca, too. A lot of the old families have died, or moved away, or are doing time. Many new residents are from other countries, including Mexico and Central America, and aren’t invested in, or care about, the barrio history.

I went by Ahumada’s Market. An Indian man has owned it for 10 years. There’s a Korean church on Madison, along with a library branch. A Korean man owns a market nearby as well.

Maybe in the rapid-fire change of economics, real estate and culture in Southern California, in contrast to other other parts of the world I could name, it’s more accurate to say that “Todo Se Olvida” – Everything Gets Forgotten. 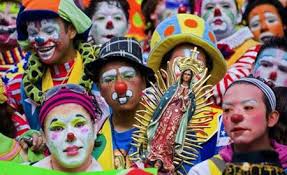