Lately, I’ve been struck by how the folks who come here looking for movie or music stardom from all over the US are part of what keeps Los Angeles vibrant. 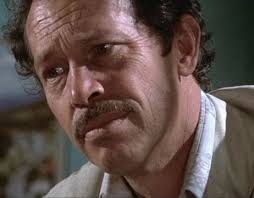 These are wannabe actors, singers, musicians, dancers, writers — folks who’ve been told by their high school drama or choir teacher in Nebraska or Louisiana that they have talent and ought to test themselves out in Hollywood.

These folks add as much dynamism and energy to the LA economy, I’d bet, as do immigrants from Mexico or Korea or somewhere, here willing to do what it takes to piece together a new life.  They just don’t stand out the way immigrants do.

I wonder what would happen to LA’s restaurant industry if they stopped coming. Probably the same as would happen if all the Oaxacans left. (Just at a Westwood restaurant where our busboy was a man from Abasolo, Oaxaca.)

I was reminded of this just now after seeing a movie with one such fellow — Warren Oates, who for my money is nearly the greatest character actor of American movies. Anyway, I can’t think of any better at the moment.

He made a bunch of great westerns, and Sam Peckinpah’s The Wild Bunch and Bring Me the Head of Alfredo Garcia. I just saw The Brink’s Job, which has a couple of fantastic scenes with Oates. Starred as John Dillinger and was in In the Heat of the Night.

You know it’s gonna be good if Warren Oates is in the thing.

Came from a burg to LA, like so many. A town in western Kentucky that apparently doesn’t even exist any more. He’d entered a drama troupe in college in Kentucky then made his way out west.

Seems to me his career was made possible by a late 1960s/early 1970s’ ethos of casting rugged, authentic-looking guys in westerns and as outlaws and the like. A revisiting of the Western movie, and a revision of the history of the American West in film that took place in those years.

Otherwise, he might well have faced a bunch of Gomer Pyle roles.

As his star rose, he became part of a Hollywood counterculture rat pack that included Peter Fonda and Jack Nicholson and did a lot of things that aged him quickly.

Here’s a conversation with his biographer, Susan Compo.