I grew up listening to, and memorizing the commercials of, “Cal Worthington and his dog Spot.”

Worthington, of course, was anathema to animal-rights folks, as he paraded seals, lions, tigers, hippos, etc, all named Spot before viewers of late-afternoon Westerns on Channel 11 or 9 or 5, urging them to “Go See Cal” with that Beverly Hillbilly banjo going loco behind him.

Cal Worthington was the last, or longest-lived (or both) of the Southern-accented used car dealers who came with the first waves of white migration from the South and Midwest to LA.

There were more. Just can’t remember them right now. One guy was not like them. Bob Spreen. Remember him, with the mellow tone? “Bob Spreen Cadillac. Where the freeways meet in Downey.” Like he was from, like, Indiana or some place, but definitely not from Oklahoma. 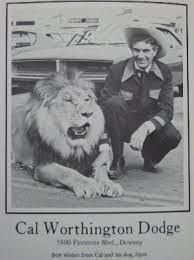 At first, these Southern car dealers never mentioned Spanish, then as years passed they couldn’t avoid it and began tagging each commercial with a roughhewn “Se Habla Espanol.” Then they just faded away.

Now the South Gate Boulevard of Cars is dotted with used car lots owned by Arabs and Cubans, and staffed by Mexicans selling to other Mexicans.

And now Cal is dead. How can we go on?